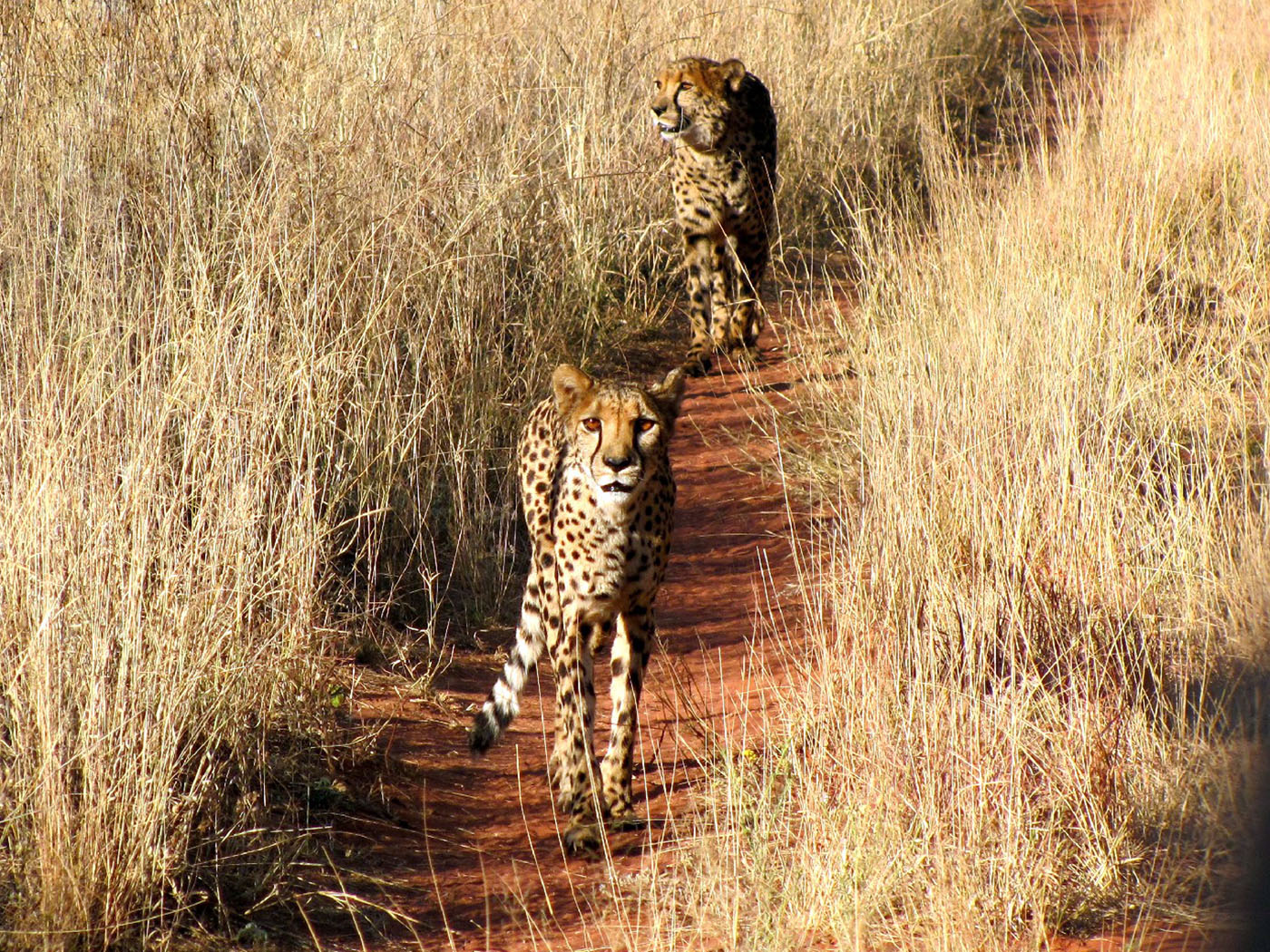 If you are looking for a Cheetah hunting safari in Namibia it’s important to know that the region where Ozondjahe Hunting Safaris is located has the highest density of Cheetah population in the world. Our hunting Cheetah trophy pictures speak for themselves, we obviously have a high Cheetah population and an excellent trophy quality.
Click HERE for more Pictures on Hunting Cheetah.

We have an excellent hunting team of PHs and trackers at Ozondjahe Hunting Safaris who have successfully been tracking and hunting Cheetahs with us for many years. The chance according to the Namibian Professional Hunting Association (NAPHA) to take a Cheetah in Namibia on a safari is around 20 percent. It is very difficult to assess the percentage of chance to take a Cheetah, though from past years we have had a higher than 50 percent success rate on Cheetah hunts with our clients. 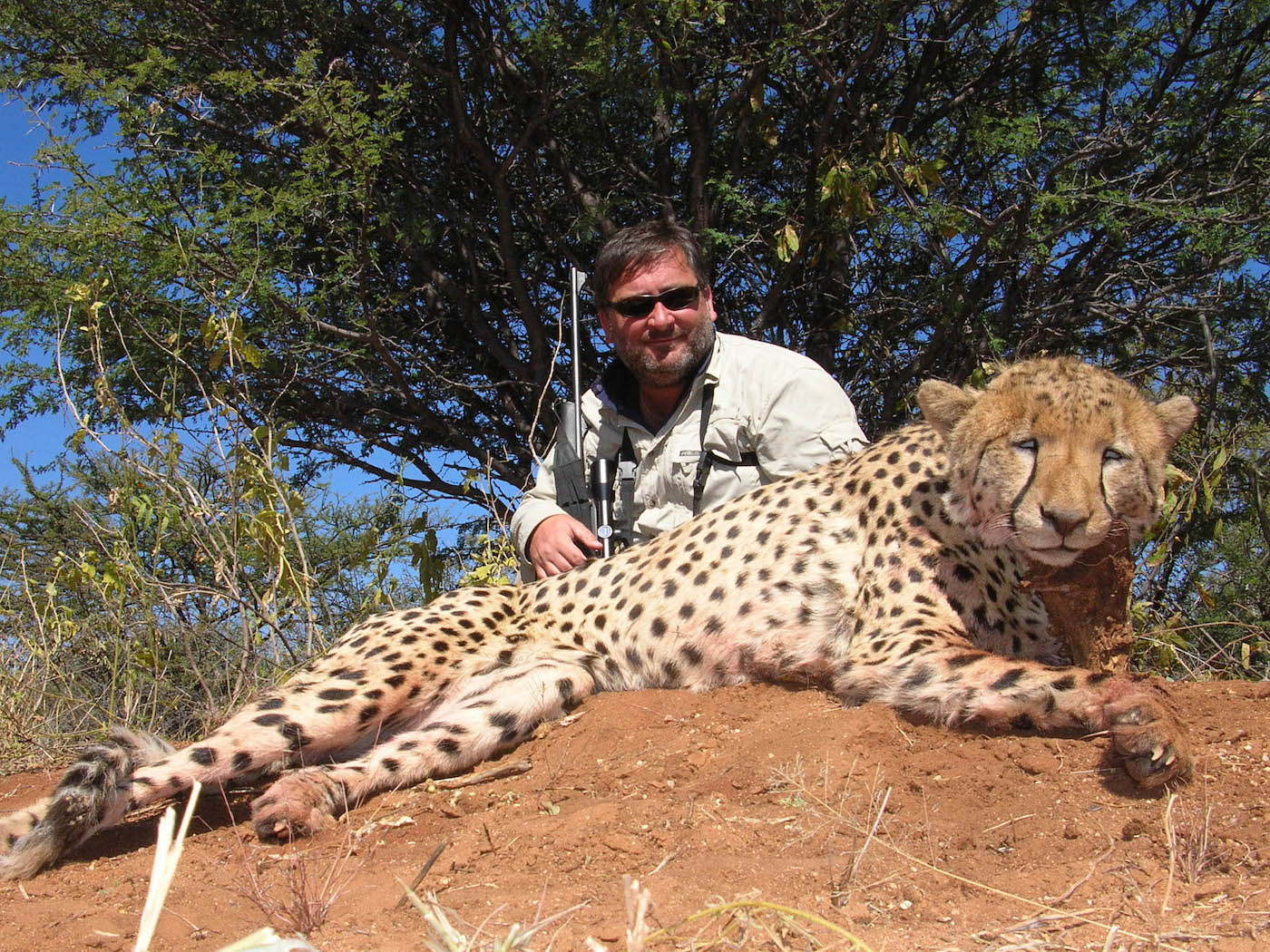 Cheetah hunting is challenging because a Cheetah’s territory is vast and they are constantly on the move. The density of Cheetah varies according to prey availability and Ozondjahe Hunting Safaris has a plentitude of game. A Cheetah only eats freshly killed meat so they don’t respond to baiting as is commonly done for Leopard or Lion. However if you happen to come across a freshly killed antelope by Cheetahs, the chances of the Cheetahs coming back to eat their kill is very high, even if they have seen or smelled you. This is a very fortunate encounter situation and a well placed simple makeshift hide should be quickly put together on the spot for an opportunity to see them return to their kill within a pretty short period of time.

Suffice it to say that Cheetah hunts are mostly done on an encounter basis, it does take a bit of luck to encounter them, usually while traveling long distances by car over our territory, some tracking can also be conducted although the Cheetah is a particularly challenging animal to track for a variety of reasons. Hunting can also be done from a blind at a waterhole or known areas frequented by Cheetahs at Ozondjahe Hunting Safaris territory such as particular plains, play trees and scat rocks which can tremendously increase the chance of a successful Cheetah hunt. 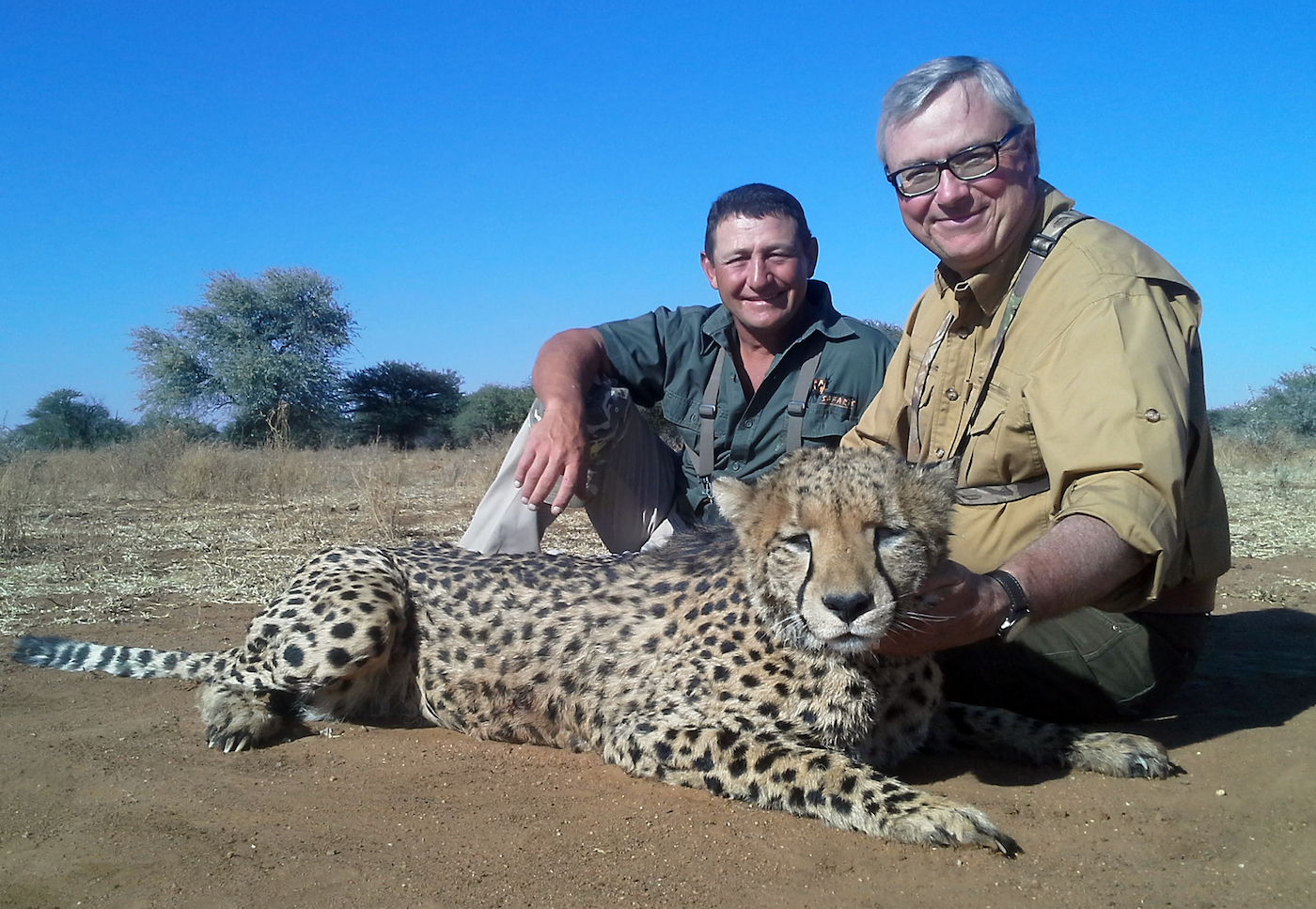 There is no particular time of the year that is necessarily considered better to hunt a Cheetah at Ozondjahe Hunting Safaris as Cheetahs are present throughout the year since their territories are often located in areas where there is a rich supply of wild game and water. A Cheetah hunt in combination with plains game hunting requires a minimum of 12 full hunting days (13 nights in camp). Hunting Cheetah with a bow is legal in Namibia, although it is very difficult to do as it requires both skill and lots of luck.

Hunting at night in Namibia is prohibited however since Cheetahs are diurnal, more active during the day than night, it is the perfect situation to hunt one. In warm weather, they move around mostly during the early morning and late in the afternoon when the temperatures are cooler however one can truly be encountered at any time during the day. A Cheetah’s day is dedicated to hunting and trying to stay cool when it gets very hot.

Should the opportunity at a mature Cheetah present itself, one will have usually a very small window of opportunity to take the shot, as they do not normally stick around for long. The interaction can be so brief that it may be difficult to discuss much with your PH at that time, so the discussion of certain potential circumstances should be sorted out before hand to avoid any missed opportunities or confusion. The client must be prepared and ready to shoot to seize the opportunity when it presents itself. 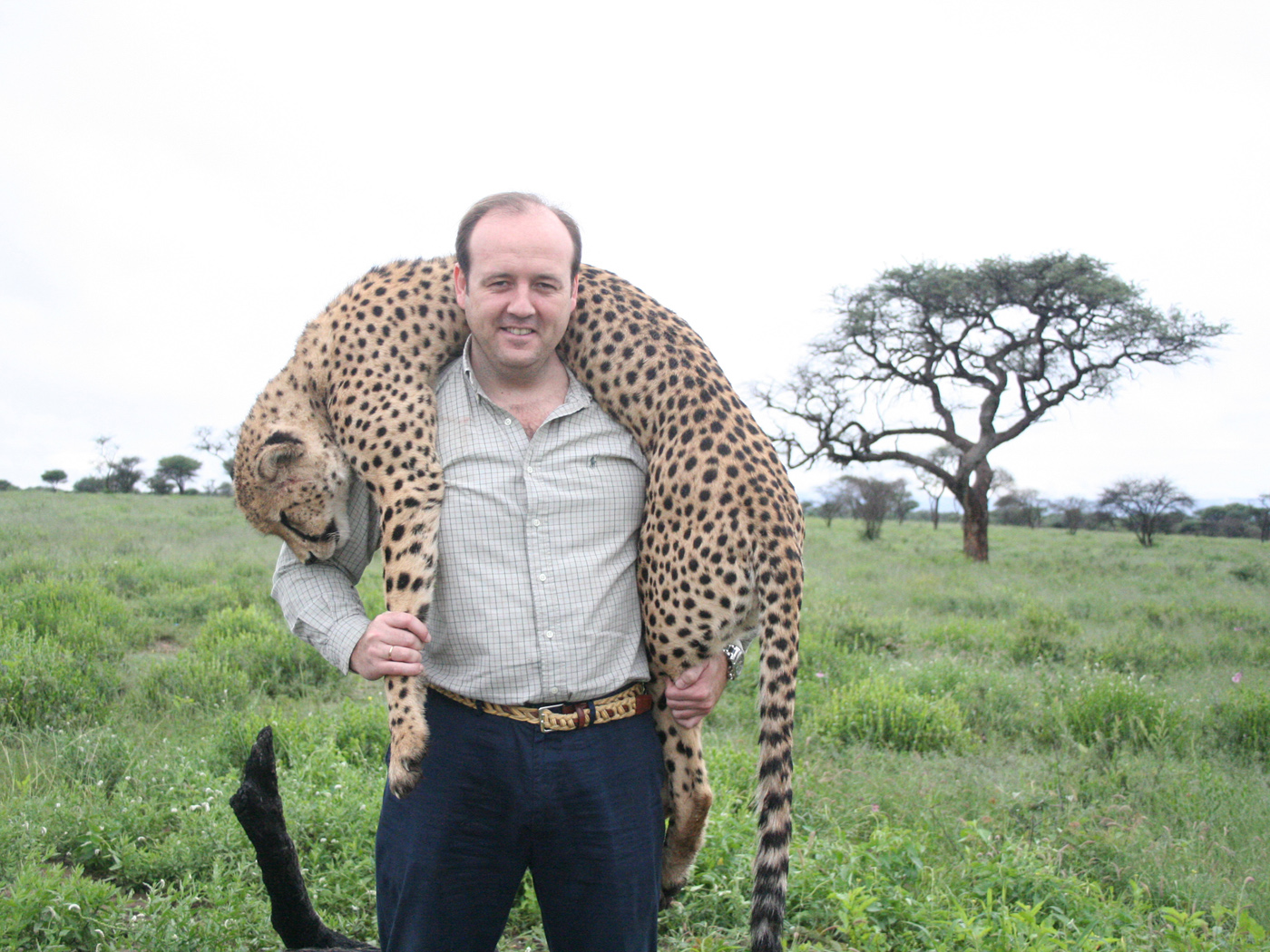 Both male and female Cheetah are hunted in Namibia, the male is usually slightly larger than the female, but there are no major differences in appearance between the male and female cheetah. It is very difficult to differentiate between the two and aside from being able to see the testicles of a male Cheetah there is no reliable method of judgment. Even if time allows, not seeing the testicles does not necessarily mean that it is a female as their broad and heavy tail very often conceals their testicles.

Shooting distances will vary greatly depending upon the environment but a 300 yard (300 meter) shot on an open plain should not be out of the question should one be comfortable with it. Cheetahs are not very hardy animals so a caliber for plains game such as a 7 mm (.284) caliber along with a good bullet should do just fine. 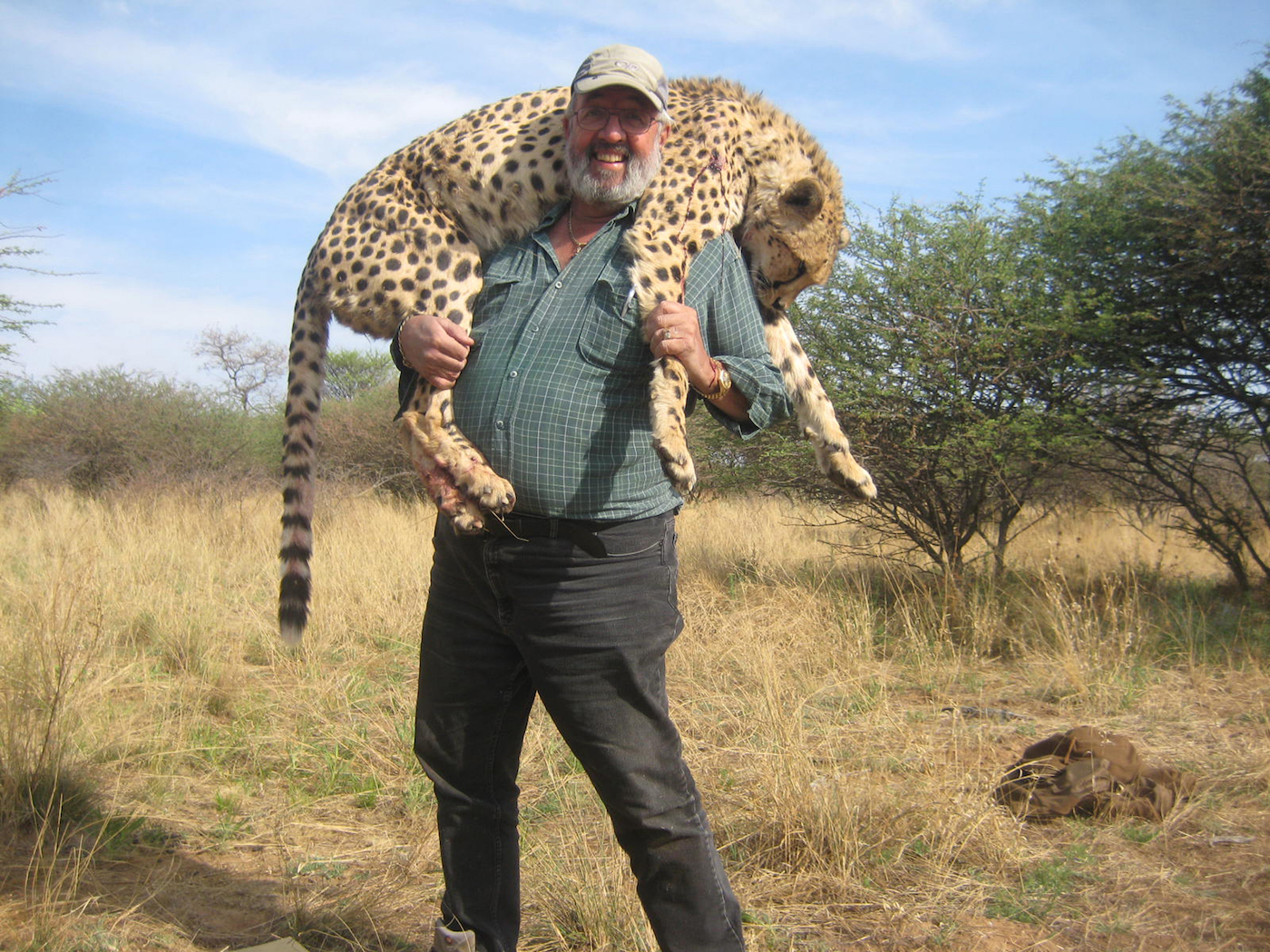 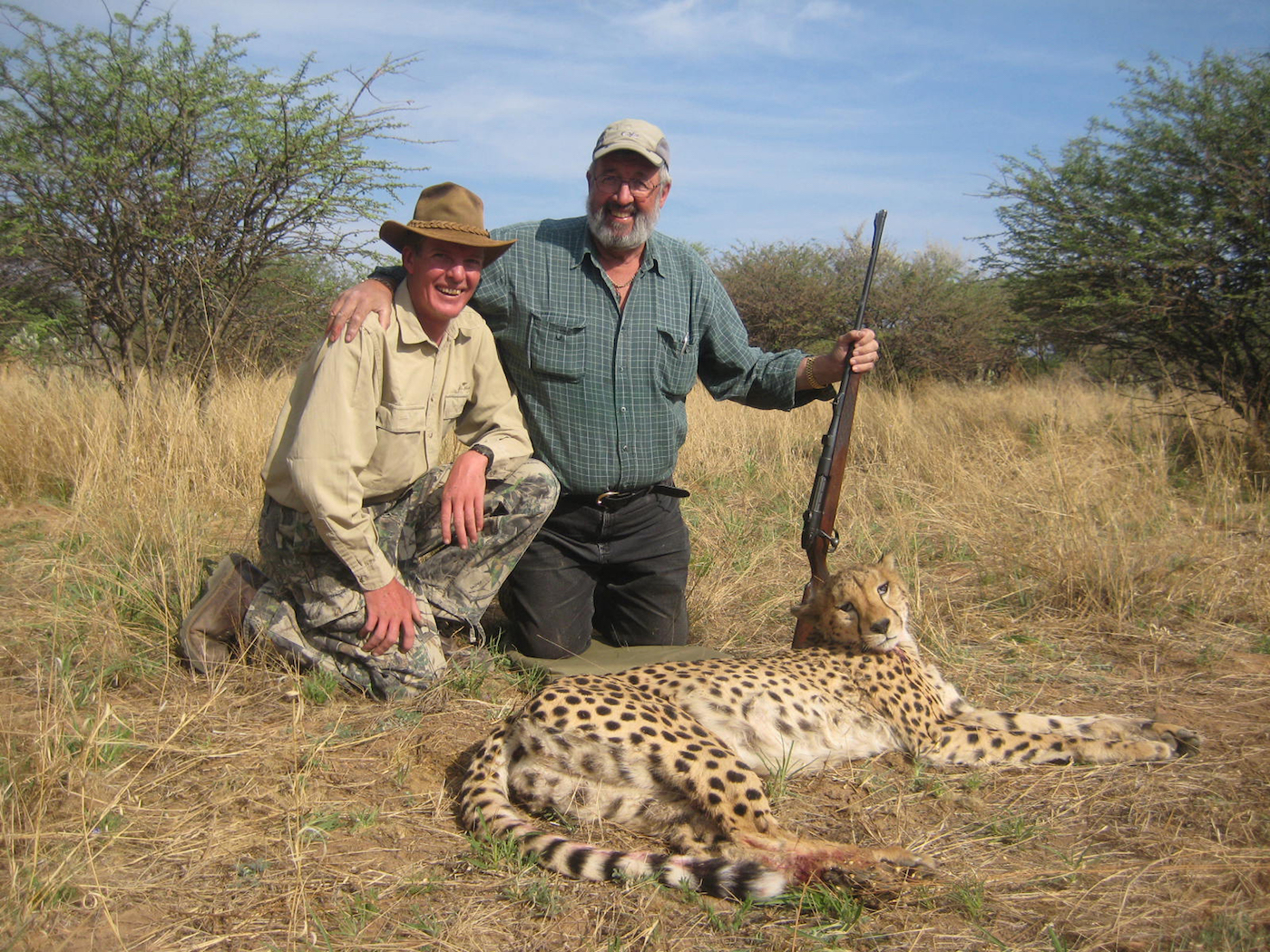 This is the first Cheetah taken with a bow in Namibia. World renowned bowhunter Steve Kobrine took this Cheetah with a 75 yard shot: 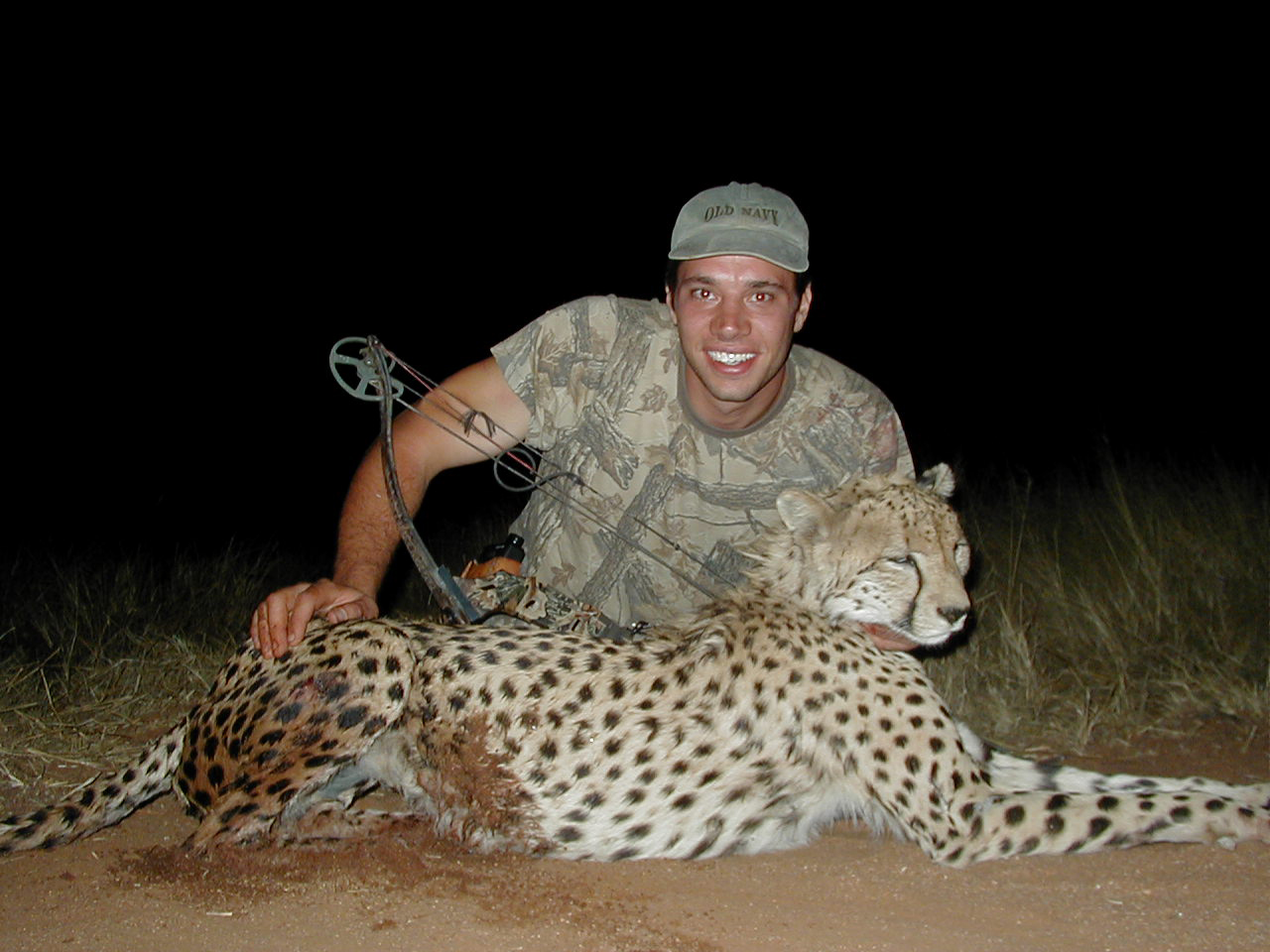 Predator trophy hunting may not take place during the period between 30 minutes after sunset in any day and 30 minutes before sunrise the following day and artificial light is prohibited. Only free roaming, self-sustaining and adult predators may be hunted as trophies with a minimum skull measurement of 27 cm for a Cheetah. Hunting Cheetahs with dogs is prohibited in Namibia. 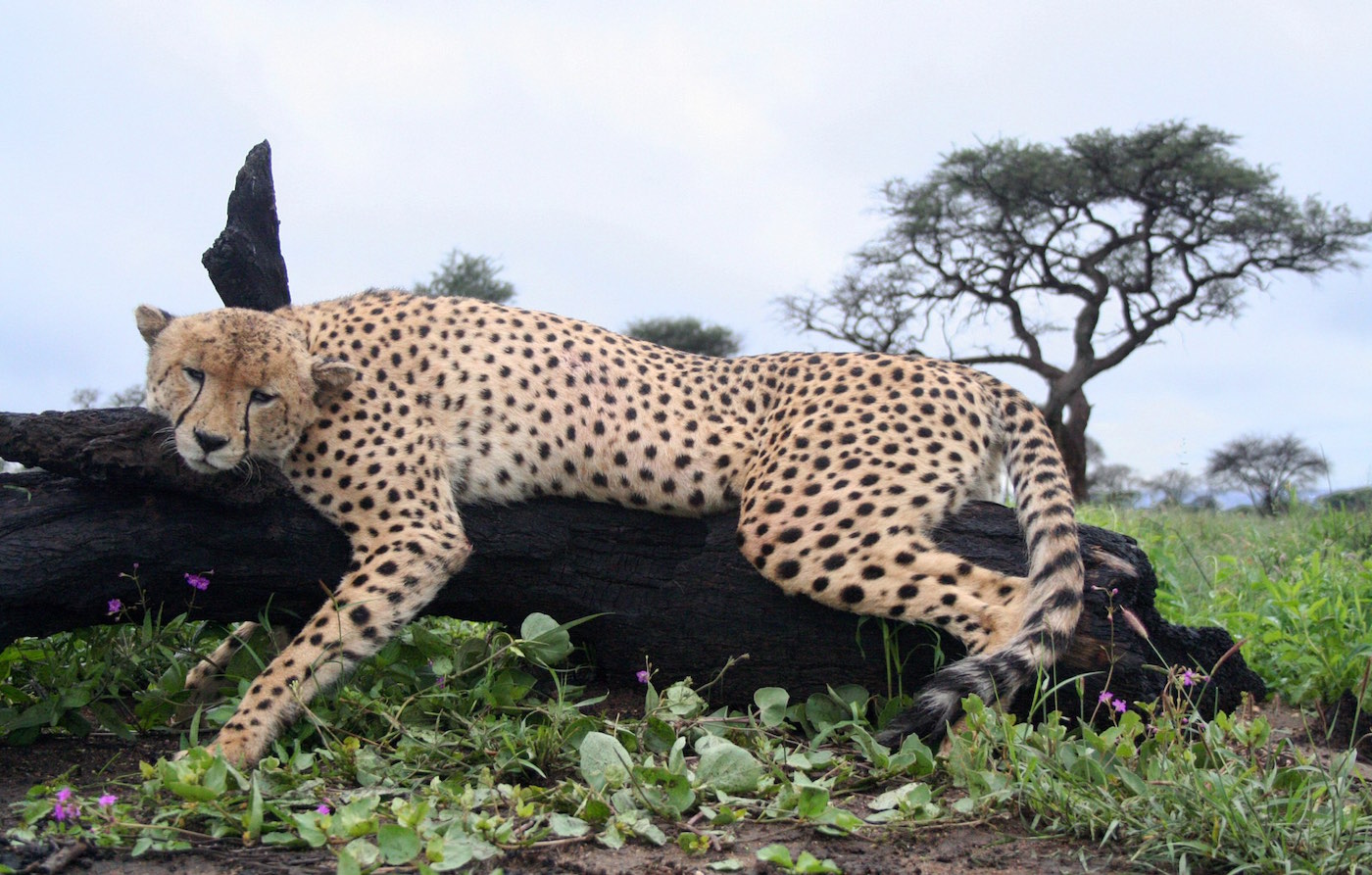