Sossusvlei, the Namib Desert For A Three Day Tour

The bright red-orange crescent shaped sand dunes at Sossusvlei are one of Namibia’s top attractions and reputed to be the highest dunes in the world. At around 1066 feet (325 meters) high, these ever changing, wind sculpted giants are truly a spectacular and impressive site. Sossusvlei is so overwhelmingly beautiful that many people say that visiting the undulating dune sea is one of the most memorable experiences of their lifetime.

One would expect this vast sandy landscape to be barren, but to the contrary the Namib is home to a number of specialized animal species, all have adapted to the harsh environment, many by seeking shelter underground to escape the heat, and obtaining their precious water solely from fog condensation. You will be accommodated as well as eat your meals at a very comfortable lodge outside of the Park, from where guided tours will depart.

Due to the long distance (220 miles / 350 kilometers) and some unpaved sections of the road, from Swakopmund to Sossusvlei it is a six-hour drive and may not be possible at certain times of the year. For this trip it is necessary to spend a minimum of two nights and is best done as an extension to the Tour of Swakopmund. If time is limited, an alternative is to charter an aircraft, either from Ozondjahe Hunting Safaris private runway or from Swakopmund airport for an additional charge. 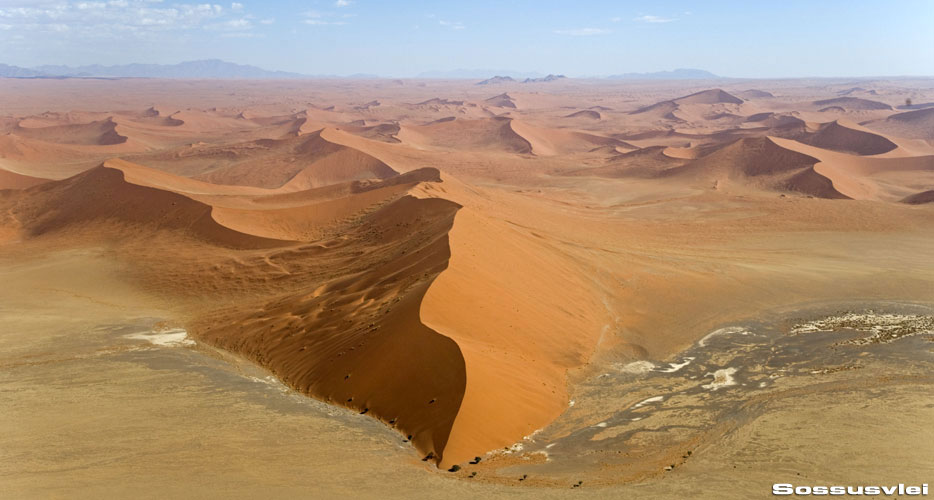